They interviewed Christian Lindener, vice-president of innovation and company building AerbusScale and global head of innovation at aerospace and defence company Airbus.

Yates started off the discussion by drawing the attention of corporates in the audience to the question of why they should care about organic venture building in addition to strategic CVC investing. The response lies in disruption that could take even established companies out of business.

She noted that companies are going out of business much faster today than ever before – with an average lifespan of 15 years now versus 75 years half a century ago. She also cited data that there are 842 unicorns with $2.7 trillion in capitalisation and stressed that the “barbarians are still standing at the gate”, alluding to large venture capital firms sitting on billions of dollars of capital looking to disrupt every industry.

She explained how Mach49 recommends that corporates have four major arrows of innovation, including an M&A unit, a strategic partnering unit, venture investing and organic venture building in the company’s own venture factory in order to drive organic growth from within.

She also touched on a rather simple but often overlooked question: “Why is it that large companies often cannot do internal venture building?” She noted: “There is no reason why the ‘dinosaurs’ cannot be like disruptive startups with their scale and resources. There is no reason Blockbuster could not have created Netflix or that Marriot could not have launched AirBnB.”

Yates also pointed out that a large corporation should ideally have a CVC programme as well as a venture factory that are working together to bring disruptive innovation from both outside and inside the organisation.

Airbus’ Lindener, an entrepreneur-turned-VC investor, made an announcement that Airbus had decided to revisit its innovation toolkit and how the “mothership engages with startups”. He said that previous programmes focused on internal innovation have been scrapped during the pandemic and now are all combined under a single unit dubbed “Airbus Scale”, whose reason d’être will be to facilitate venture and company building from within the organisation.

He commented that nearly 80% of the revenues of Airbus are still coming from aircraft, which makes it ripe for creating value by looking for new growth opportunities. “We have touched every support function of the company,” he said, pointing out that they partnered Mach49 in a bid to learn how to properly execute the plan.

Yates and Holland then shed light on why does Mach49 called this type of initiative “venture factory”, explaining it was a deliberate choice to shift people’s focus to execution: “Mostly people call it differently. We are trying to get people to stop saying ‘incubator’ or ‘accelerator’ because you need both of those and more.”

According to Yates and Holland, failure to execute when building a company is also a missing piece, beyond merely developing a product prototype, there are other questions that must be addressed such as compensation to recruit a successful team and get it to move forward.

Airbus’ Lindener added that it is advisable for large organisations to think of a venture factory as a potential engine for internal growth. “It is more exciting but also the impact of the internal company building can be bigger. We had amazing people in the company that went out on their own and built their own companies, some of which ended up being unicorns. We could not give them space to do that within Airbus, so that is what brought us to rethink our approach.”

Lindern noted that this requires a revamped holistic approach, which involves changing processes and procurement such as the hiring process within the entire organisation to attract more entrepreneurial talent.

Yates also commented on the three big mistakes when building venture factories. First, most large companies, when setting up venture factories, need to have a scalable model to tolerate failure rates higher than those of traditional accelerators, incubators or venture funds across more projects underway.

Second, she said there is much more friction in terms of how executives fail to imagine how such internal innovation could actually end up generating sufficient organic growth which could ultimately translate into a higher market capitalisation for the mothership.

Third, “senior executives fail to grow and need to stop measuring such startups with legacy metrics”, she said, “they need to think of new metrics like customer acquisition and revenues rather than just profit”.

Speakers on the panel also addressed the issue of culture and cultivating the proper innovation mindset. Yates added that there were four types of people that one needs to think about in the process, including founding teams, the team in charge of accelerating and incubating, the venture board – or the executives that would sit on boards – and what she refers to as “venture advocates”.

She defines the last group as crucial in building the proper innovation-friendly culture within an organisation and defines them as people working across business units who actively collaborate and helps startups that are being created from within.

Participants in the discussion also concurred on the importance of effective communications in the process both internally and externally. A case in point would be some uncomfortable conversations that may arise regarding compensation.

Yates pointed out: “Sometimes senior executives do not want founders to be making more money than they do. There are different solutions to that. Phantom stock plans, spinning the companies out and setting them up with normal cap table.”

Lindern added: “You have to think about whether you want growth or you want to control. Founders need to have a stake. Otherwise, you are not going to get the best talent or the best effort.”

Guengant, global vice-president and head of strategy, digital solutions and business operations of corporate incubation and acceleration at electronics manufacturer Hitachi, was unable to participate in person, but he sent a pre-recorded message.

In the pre-recorded message, Gauengant explained why Hitachi decided to look at venture building and incubation and acceleration from the inside out. He said it had to do with realisation benefits derived from building companies internally.

Guengant said: “It became very apparent for Hitachi as a group that we need to pay specific attention to some of the trends that were impacting us and being able to react fast enough.

“‘Fast enough’ means being able to assess the opportunity and start incubating businesses two-to-three years ahead and make this more of a long-term investment that would allow us to respond to the market disruption in a two-to-three-year timeframe.”

He also clarified that within the Hitachi teams typically form three-year midterm plans, setting milestones to achieve based on strategic goals coming from the top. So, when starting the venture building initiatives, he hinted that his team had to deal with a slightly short-term orientation.

“Business units have the tendency to focus on KPIs…so to us it was very important to engage with the corporation in terms of the difference between long term growth versus short term results,” Guengant said. He also highlighted the need to allow venture teams to focus on market validation and customer validation for the companies that are being created. 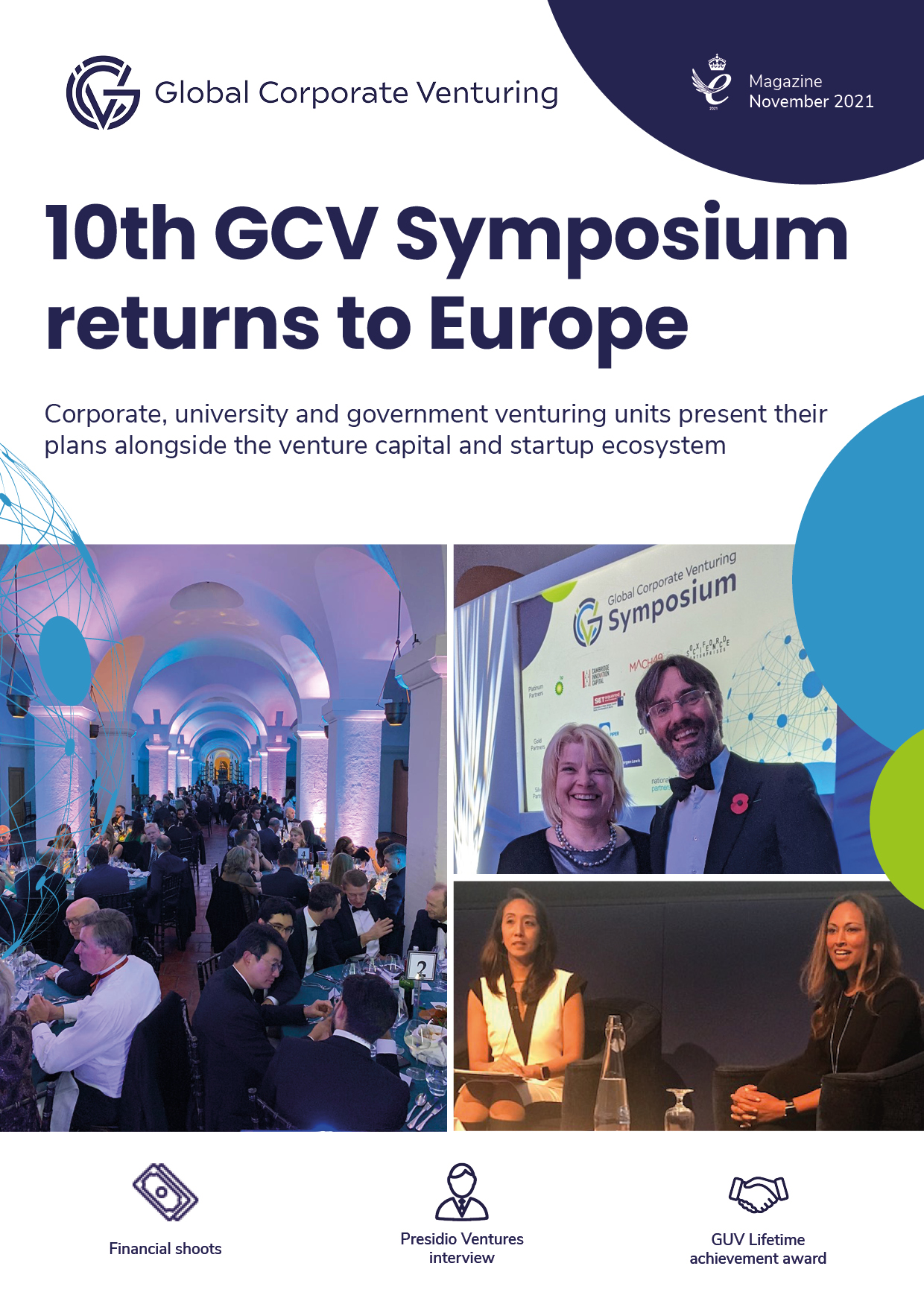