With a fast-growing middle class, China is the world’s second-largest economy. The country is expected to overtake the US as the world’s largest economy by 2028, according to the Centre for Economics and Business Research’s prediction in December 2020.

China was the first country to face the covid-19 outbreak, but it managed to bring the epidemic under control through a coordinated central response. The International Monetary Fund projected the Chinese economic growth to be 1.9% in 2020 and 8.2% this year.

“The ecosystem here benefits from significant R&D investment across many new technologies, both from state resources as well as the private sector. Another advantage is massive and relatively well-structured datasets, which can be helpful for rapidly developing some types of AI solutions.

“On the other hand, many institutions in China still prefer local deployments or private cloud solutions, compared to the US, where we perceive greater openness to public cloud infrastructures. One other important point is that, culturally, there is less willingness to pay for enterprise SaaS (software-as-a-service) solutions, which makes monetisation more difficult for some business models.”

Eddy Dong, Greater China lead at Accenture Ventures and Open Innovation, a corporate venturing subsidiary of Ireland-based professional services firm Accenture, added: “As a result of its unique culture, language and – perhaps most importantly – its different system, the Chinese innovation ecosystem is somehow ‘isolated’ from the rest of the world.

“Like the Chinese economy, China’s innovation ecosystem looks quite self-dependent: from its local startups, VCs, CVCs, accelerators, incubators, media, universities and government facilities, to a gigantic and robust local market that always embraces new ideas and tolerates their side effects so well, fuelled by other enablers like very strong local manufacturing capabilities, supply chain and cheap yet relatively good quality labour and talent. All these made China ‘the next innovation centre for the world and the top target to look at if you are hunting for something exotic and at scale.

“Due to this ‘isolation’, most Chinese entrepreneurs and their investors have developed a lower appetite for risk. They tend to copy successful products from abroad or become the best player at a proven business model, despite sometimes there have already been tens of competitors in the same niche. As a result, the survivor in a certain area usually turns out to be very strong and at very large scale, implying an ultra-high financial return rate for those lucky investors.

“The other thing you would have never expected to see in other places is the government-led ‘top-down movements’, for instance, the Made in China 2025 plan, the New Infrastructure Construction initiative, and the E-Invoice Reform. Especially for the 2B (to-business) market, the impact is huge. New local unicorns are born every time there is such a movement going on.”

She gave healthcare as an example. “Clinical providers, payers, patients, the technology sector and the government have all actively engaged in looking for better solutions to the entire patient journey, from prevention, treatment to chronic disease management. All kinds of initiatives have emerged along the chain, the majority of them heavily backed by data and technology.

“As China’s ecosystem has matured, we have all had to make sure that we have something unique to bring to it. In the case of Ping An Global Voyager, the story is quite clear: we invest in situations where we believe that over the life of an investment, we will be able to create significant value for a partner company.

“Usually, that value-add takes one of three forms: we can become a significant anchor user or consumer of a product or service, like we have done with Airdoc, an AI medical diagnostic company; provide a China distribution channel and cloud hosting to businesses that would otherwise have a harder path to market access here – our work with H2O.ai, a machine learning as a service company based in the US, is a good example; or we can provide exclusive access to software development kits that contain some of our homegrown technology, as we have done with some of our companies in Europe.”

“After China’s reforming and opening up, the concept of venture capital was brought to China. However, due to the situation such as legal and financial environment and ideology at that time, no trend was formed in China. Except in 1993, IDG VC entered China and invested in more than 100 companies including Sohu, Baidu and Tencent, which was the first notable investment event at that time. Apart from that, the Chinese government invested in a few companies but hardly got any financial return.

“In 2001, two big events brought Chinese VC into a capital winter. The first was the dot-com bubble. Many internet companies failed to implement their ideas or technologies and made their investors lose money and confidence. On the other hand, China delayed the opening of the Second-board Market (or ‘Growth Enterprise Market’). This caused VCs to lose their exit method. It can be said that Chinese domestic VCs faced the worst time in the beginning.”

“Although domestic VCs faced a number of problems, foreign funds invested in many successful companies and gained a huge amount of return. Starting from 2003, [online travel agency] Ctrip was listed which drove a new round of climax in China’s internet and VC. Another iconic event was the initial public offering (IPO) of [investment firm] Shanda in 2004. This made Shanda chief execuive Tianqiao Chen the richest person in China. After those, Alibaba, [software company] Kingsoft (Jinshan) and a lot of other internet companies’ IPOs brought the trend back again in 2007. During this time, most investors were American funds or US-dollar funds.”

“The Second-board Market finally opened in 2009. This gave a new exit method to domestic or renminbi-funds which caused a boom in IPOs. 26 IPOs from Shenzhen Venture Capital’s invested companies had made a record, and it is just an example of how many local VCs had risen during that period of time. Meanwhile, 43 Chinese companies went to America for IPO in 2010. Also, during this time, the concept of accelerator or incubator had been brought to China. Some famous angel investors like Kaifu Li brought a new trend of early-stage investment.”

“The New OTC Market, opened in 2014, caused an unprecedented boom of the venture market. Many tech giants went public during this time and made a lot of billionaires. It is interesting to note that during this time, domestic CVC has developed rapidly. For example, Tencent and Alibaba are both building a complete internet ecosystem including e-commerce, online payment, navigation, food delivery, live streaming and fintech.”

“With the collapse of a lot of failed startups such as Mobike, the heat of investment cooled down. They are more cautious when making investments. In 2018, the Chinese government issued the strictest new rules for capital management, which brought the market back to rationality. Since the covid pandemic and trade tensions, the internet is no longer the only gold mine to look at – life sciences and semiconductor investment have been soaring accordingly.”

Dong added that China’s traditional advantages include AI, such as autonomous driving; payment – Alipay and WeChat Pay and their respective ecosystems; new retail, including most advanced e-commerce and social-commerce; and customer experience-focused brick-and-mortar innovation.

Wang said her team at Ping An’s Global Voyager Fund believes in B2B platforms, both in digital health and fintech. “Any platform becomes stronger when it adds stakeholders who can also be significant users of that platform. So we are often quite happy to partner CVCs from other financial services or healthcare firms, either from China or globally, in funding rounds. That requires us to keep an open and frequent dialogue with our peers from around the world.

“Ping An Group itself has worked with many top universities around the globe as a technology or research partner. For example, Ping An and Tsinghua University jointly established the Global Financial and Economic Development Research Center and the Global Medical and Health Research Center to build up knowledge in the financial and medical fields. We are committed to helping to establish a modern financial services industry and to improve the quality of overall public health in China.”

Accenture Ventures also provides cross-industry go-to-market opportunities for its portfolio companies and its local VC and CVC partners, according to Dong, leveraging the parent firm’s network of global 2000 clients and partners. “Sometimes we also share visibility and intelligence with our VC and CVC partners regarding investment target sourcing and due diligence. We have been considering joint investment sometime in the future. We have been well-connected with tens of local VCs and CVCs so far.

“Similarly, we have been working closely with top local incubators and accelerators in a way that they bring best-in-class early-stage startups while we bring demands and pain points from our clients. We are considered an ideal go-to-market partner and a potential strategic investor for their alumni startups, while they provide us leads for partnership or strategic investment plus more exposure to the local innovation ecosystem.

“We also have active collaboration with top universities around the globe to ensure that we are at the forefront of technology advancement. For instance, we have been co-developing a supply chain resilience stress test for assessing operational and financial risks created by major market disruptions, disasters, or other catastrophic events with Massachusetts Institute of Technology in October 2020.” 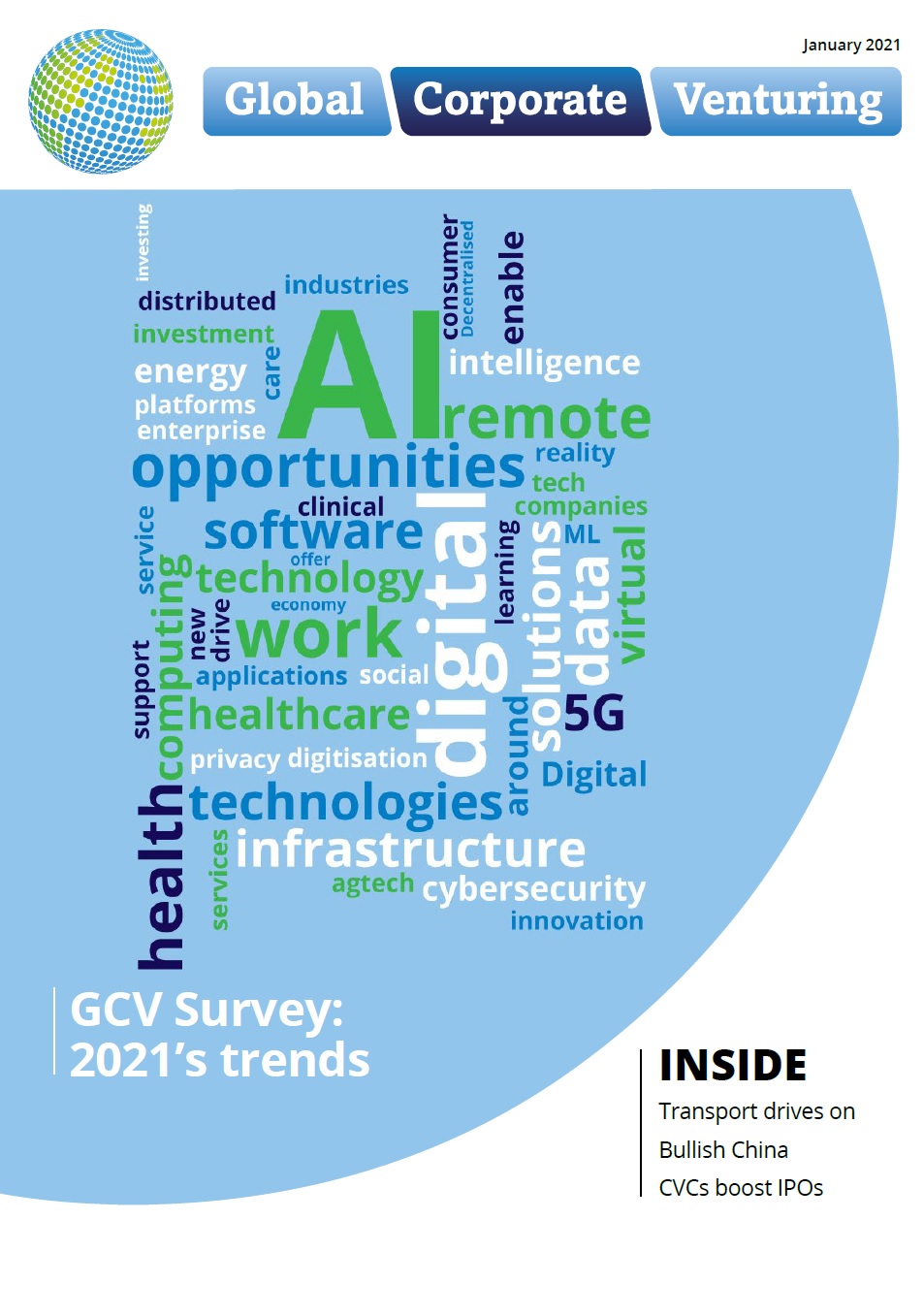 Good luck making your own fortune

The big trends of 2021 in corporate venturing