“Brazil has yet to put science, technology and innovation at the heart of its long-term development strategy,” pointed out Robson Braga de Andrade, president of Brazilian National Confederation of Industry in the Global Innovation Index (GII) 2021: Tracking Innovation through the covid-19 crisis, a report produced by the United Nations’ World Intellectual Property Organisation.

Braga de Andrade continued: “For Brazil to become a truly innovative economy, we need to be among the top 30 economies in the GII and the government’s policy, launched in 2020, pledges to make concerted efforts toward achieving this goal.”

GII ranked Brazil the 57th most innovative economy globally and the fourth in Latin America (LatAm) and the Caribbean region, having overperformed in 2021 – together with Iran and Peru – for the first time. Similar to China, India, Iran, Turkey and Russia, Brazil is a middle-income economy hosting top science and technology clusters – São Paulo was 66th out of the 100 identified by the report.

From the LatAm region, Brazil is the only economy whose research and development (R&D) expenditures are above 1% of its gross domestic product, similar to Croatia and Luxembourg. The country’s corporate R&D investment ranked 26th, being highest in the region and outperforming Mexico (31st) and Argentina (36th).

Regarding the local innovation scene, Mateus Jarros, manager for Paris Ventures, a corporate venture capital (CVC) arm of Brazil-headquartered steel producer Gerdau, told Global Corporate Venturing: “LatAm ecosystem is very recent compared with other regions of the world, especially in the scale we are now taking as usual.

“Although new, we saw that Brazil is a very resilient market; while the world was reimagining itself, VC and innovation kept on going and adapting very quickly – the number of deals and value during last reached records.

“Brazil is also unique from a LatAm perspective because it is the largest market for almost any category of products and services, either B2B (business-to-business) or B2C (business-to-consumer). The country offers enough problems and challenges to entrepreneurs to innovate and create a new business like nowhere else.”

Alan Freeman, head of CVC at Darwin Startups’ multicorporate-backed software and hardware startup accelerator spinout called Hards, who had led the corporate venturing initiative for medical equipment manufacturer Boston Scientific in the 1980s when the Boston innovation ecosystem was just taking off, noticed a similar tendency emerging in Brazil in the past five to six years, but at a faster pace.

Freeman explained: “The Brazilian ecosystem looks and feels like the environment in Boston during the 1980s. At that time in Boston, the components of the ecosystem were forming and beginning to function more efficiently and productively.

Corporate investors overall who are active in Brazil have taken advantage of the accelerated development of the innovation and technology scene in the past year and in 2020 the investment value reached $1.3bn across 47 deals while as of September 2021, $4bn have already been deployed in 48 deals.

Local corporate VCs have followed similar patterns, having invested $178m across 29 deals last year and $346m in 19 deals by September 2021.

Brazil offers many investment opportunities in a wide range of markets, according to Hards’ Freeman, who said: “The challenge is created by the number of opportunities. Also, many markets that are mature in other geographies are still in their initial stages.

“Therefore, we believe in a narrowly and well-defined investment thesis based on a deep understanding of the drivers that are creating the window of opportunity and a clear vision of the types of companies that will evolve into the strongest participants in the strongest link in the value chain.

“In other words, identify your opportunity, invest with others, stick to the game that you know, and do not allow yourself to get distracted by the vast number of opportunities.”

Gerdau’s Jarros added: “We saw the innovation landscape change paradigms for consumer markets across the country; now, enterprises and B2B are also relevant markets. We can see an increasing number of large companies paying attention to CVC, venture initiatives such as acceleration and incubation, and the ecosystem that orbits innovation and entrepreneurship.”

Four CVC exits have been logged by GCV Analytics so far this year raising $361m altogether, compared with three in 2020 with undisclosed figures.

Brazil-based companies that have helped corporate backers exit through initial public offerings include StoneCo and VTex while InfoServer, Boo-Box, Strider, Teravoz, iClinic and Petlove did so through mergers and acquisitions.

“We believe in collaborative investing with other participants in the target value chains. With each investment, we surround a strong entrepreneurial team with other stakeholders in the value chain that they are creating. Everyone leverages their strengths and resources to execute a mutually beneficial business plan. With our collaborative investment thesis, with our partners, we can build, or at least significantly influence, the future.”

Gerdau’s Jarros agreed and concluded: “Gerdau Ventures is working with CVCs, VCs and many ecosystems that are based in Brazil and also across the Americas. Our strategy covers all regions, and we are focused on where Gerdau has operations.

“We are an entrepreneur-friendly fund and eager to help founders in the mission to scale their companies and offer a lot of value from Gerdau’s massive value chain. Gerdau Ventures also works with incubators and accelerators in Brazil and the US with theme-focused acceleration programmes like construction tech companies and sustainable buildings.” 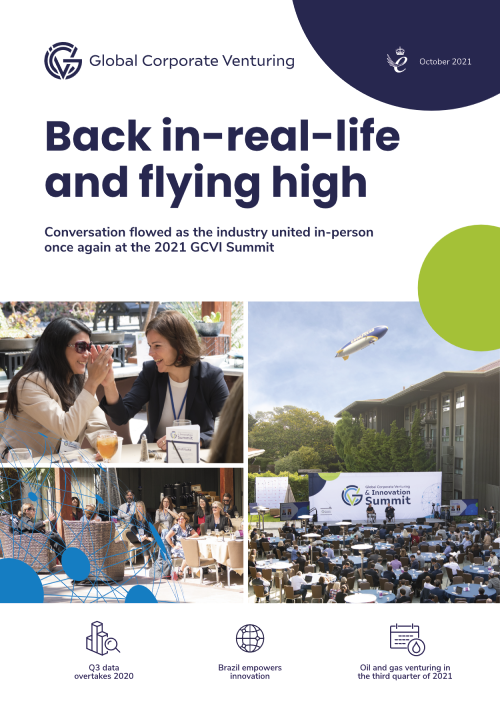 Oil and gas venturing in the third quarter of 2021

From entrepreneurs to studios to agents