After two decades spent building up University College London’s technology transfer subsidiary into a powerhouse on the international stage, Anne Lane is a wholly deserving recipient of the Global University Venturing Lifetime Achievement Award for 2021.

In 2020, as the coronavirus pandemic struck, Lane’s UCLB was as active as it has ever been, striking 700 licence deals and almost 2,000 covid-response licences. The strong partnerships that UCLB had forged with medical researchers and National Health Service Trusts meant that it played a pivotal role in the UK’s pandemic response, Lane said.

Most notable was the development of the UCL Ventura device, a continuous positive airway pressure breathing device designed to prevent covid-19 victims having to go into intensive care and on to ventilators. The Ventura project was a collaboration between UCLB, UCL Hospital and Mercedes AMG High Performance Powertrains, the Formula One engine manufacturer.

“This demonstrated something I think universities are good at doing anyway,” Lane explained. “Where lots of groups get together and work as a very diverse team to bring something to the benefit of society very quickly. And in this case, it was patients infected by covid-19 who had become seriously ill.”

UCLB was able to rapidly disseminate the technology behind the Ventura device around the world thanks to its express licensing platform, which had until that point been typically used for lower-value software licences.

At UCLB, Lane created what she described as a “fully integrated commercialisation company”. She elaborated: “UCL has a very radical approach: it is research-intensive, from arts and humanities to historical and social sciences, to computer science and engineering. It has a strong innovation and enterprise culture as well. This is the basis UCLB works from, and it gives us a lot of reach – and a lot of dealflow.”

Lane pointed out that UCLB’s global reach was evidenced by its spinouts, with four IPOs on the Nasdaq market in the last four years – such as Orchard Therapeutics and MeiraGTx, developers of cell and gene therapy technology.

Lane said: “We are large and very successful but that is based on more than 20 years of doing technology transfer and commercialisation. The fact we have been going a long time makes a big difference – as well as having such a large institution behind us.”

UCLB has also benefited from its leading role in Apollo Therapeutics, a collaboration between UCL, Imperial College in London and University of Cambridge as well as pharmaceutical firms AstraZeneca, GSK and Johnson & Johnson. Apollo, which was set up to transform early-stage science into patient treatments, recently raised £100m in a series A round.

Lane said: “The thinking behind Apollo was that universities spend a lot of time researching and then developing projects to try and license them to big pharma – but they then have to redo the work because it has not been carried out in the way the pharmaceutical company would do it.

“That is not a very capital-efficient way of bringing on new projects. Apollo has particularly helped researchers who do not necessarily want to go into a spinout – they are interested in commercialisation, but they want to carry on with their academic careers. This allows them to do that: the Apollo collaboration will take those projects on, invest in developing them further and take them to a big value inflection point.”

Lane’s link to UCL goes back further than the 21 years she has spent in the institution’s technology transfer company. She completed her PhD at UCL in the 1990s, followed by a post-doctoral fellowship. Lane then moved to Harvard to carry out more post-doctoral research and subsequently relocated to Montreal to work in out-licensing and portfolio valuations for RTP Pharma, which was later acquired by SkyePharma.

Erica Fawell worked with Lane at RTP Pharma and recalled: “Agreeing to come on board and assist the business development function of a newly funded and untried biotech startup, she adapted readily to the culture and became a valued asset and key participant in the enterprise.

“I am enormously proud of Anne’s achievements and take pleasure in seeing her become the leader and visionary that I always knew she could be.”

Having also completed an MBA during her time in Canada, Lane saw a new role advertised at UCL Ventures, the precursor to UCLB. “I had realised during my time being a scientist that there were people who were much better at it than I was,” she explained. “So, this was a job that meant I could continue being involved with the science and really help to make the maximum impact but without doing the science myself.”

Jeff Skinner was the director at UCL Ventures who hired Lane. “I recruited Anne at a time when UK university technology transfer units – including UCL – were run by ‘inspired amateurs’ who were learning as they went,” he recalled. “Anne came with an established background in licensing and, though I think she struggled with some of her academic colleagues at first – ‘they just will not do as they are told’ – she came to earn their respect by sheer dint of being an excellent and cheerful advocate, and by concluding licensing agreements that served their commercial and academic interests – and that never unravelled. She simply did the job without drama.

“I regard her as the most accomplished and long-standing member of our profession in the UK and am delighted that she has won such recognition from GUV.”

Lane’s predecessor at UCLB was Cengiz Tarhan, who said: “Anne took over the helm at UCLB from me nearly three years ago and I have watched her grow into that role with pride.

“She has been instrumental in the success of UCLB. Anne was always supportive and a key member of my team. She is very able, patient, tolerant and perseveres – and many of these characteristics complemented mine well. She manages people and builds their respect and is a good negotiator. I was deeply appreciative of her wise counsel over the years. She has been a loyal colleague and friend and deserves to be recognised with this award.”

Donna Hackett, Lane’s first boss at UCL, added: “Anne began her technology transfer career with me in 2000 at UCL Ventures and has never looked back. Her enthusiasm and commitment are infectious. She is collegiate, incisive and exceptionally knowledgeable.

“She is a well-deserved recipient of this award and I am pleased to know Anne as a friend.”

Lane added: “UCL is a great place to work: it is very flexible, and the fact we have been able to do what we have done as a company is testament to this. It has a great innovation culture and a wide-ranging approach.”

Lane highlighted the fact that UCLB also worked with the social sciences as social enterprises. “We do not just focus on a financial return, and I think that is really important especially, when you are working at a university: that is generally what people are there for, to make a difference.

“My role is always exciting, and there is always something new every day. And you get a reward: you see the benefits of what you are doing, and you cannot say that about every job.”

What are the key lessons Lane has learned during her time at UCLB? “Be flexible: that seems to be my mantra at the moment. And take opportunities as you see them. Sometimes you do not think things are going to take you very far but they do. Try new things out, do not be afraid to take some risks.”

She continued: “Working in research generally can be a very ambiguous environment, things are not black and white. But working in tech transfer and commercialisation takes that ambiguity to a whole new level. The key thing is to listen to what the research and your academics are telling you: they are the ones who know more than you ever will about what they are doing.

“And you need their support: you are never going to be able to commercialise any research without the inventor being on board. They are the people that make the difference.”

Lane also pointed to the importance of the work done by organisations such as TenU, PraxisAuril, Autm and STP in making the industry more accessible to those who were at an early stage in their careers or from non-typical backgrounds. “When I was doing my PhD I did not even know about technology transfer, but now I get a lot more enquiries from people who want to get into what we do.” 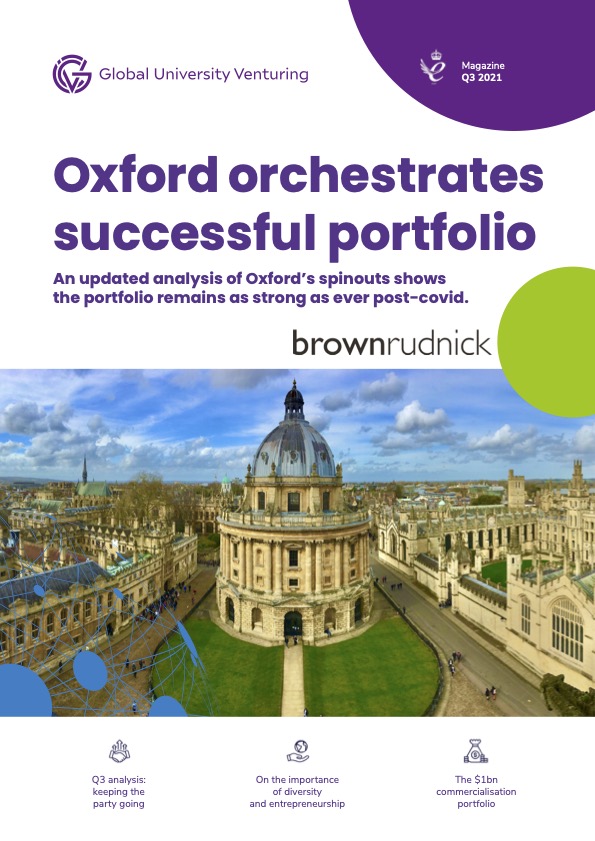