South Africa is one of the “Kings”, the fastest-growing digital economies on the continent: Kenya, Ivory Coast, Nigeria, Ghana and South Africa. The acronym was coined by Ghana-based venture capitalist Eric Osiakwan, a concept he described as being similar to Asian Tigers in the 1990s, which advanced in areas including technology and innovation-fuelled entrepreneurship.

Though tarred by corruption allegations, South Africa has a long history of entrepreneurship support. For example, technology incubator Cape Innovation and Technology Initiative was founded in 1999 and has backed more than 3,000 entrepreneurs and supported their startup projects.

Corporate venture capital (CVC) activities, however, are nascent in South Africa, although one of the largest and most successful corporate venturing groups, Prosus Ventures (formerly Naspers Ventures), has its roots in South Africa-based media group Naspers, which invested in China-headquartered internet technology producer Tencent in 2001.

Compared with its peers on the continent, South Africa has a robust budget in research and development spending and a strong track record in venture capital deals.

Naspers is the most prolific investors in the local ecosystem through its Naspers Foundry subsidiary, and is joined by financial services firm Standard Bank, reinsurance firm Hannover’s Lireas Holding subsidiary and mobile network operator MTN Group.

The largest deal involving a South Africa-headquartered corporate venturer was a $326m round raised by Africa Internet Group (AIG) in 2016, which was co-led by MTN, alongside e-commerce group and technology incubator operator Rocket Internet and Goldman Sachs. Axa also provided cash for the deal.

E-commerce platform Takealot also secured a notable round sized at R960m ($71.9m) in April 2017, which was backed by Naspers. Takealot was formed by the acquisition of e-commerce company Take2 by asset manager Tiger Global Management and entrepreneur Kim Reid in 2010. It runs as an e-commerce service that sells a diverse range of consumer goods. The corporate eventually acquired the portfolio company a year later, getting 96% of its stake.

Online travel agency TravelStart received $40m in early 2016 from MTN and investment firm Amadeus Capital Partners. Originally founded in Sweden in 1999, TravelStart spun off its African holdings into a new business in 2010. It runs a specialised service that helps travellers book holiday packages using a variety of payment methods.

Payment technology developer Yoco, on the other hand, obtained $16m in series B funding from Orange’s Digital Ventures unit. The round was led by VC firm Partech Ventures and included Dutch development bank FMO, Accion Frontier Inclusion Fund (managed by Quona Capital) and Velocity Capital. Yoco has developed a point-of-sale payments system that connects to a tablet or smartphone to enable small businesses to accept card payments.

Agriculture tools supplier Aerobotics raised $17m in a series B round in January 2021 led by Naspers Foundry, which invested alongside Cathay AfricInvest Innovation, FMO: Entrepreneurial Development Bank and Platform Investment Partners. Its technology helps track and assess the health of crops. It secured $610,000 in seed capital from 4Di Capital and Savannah Fund in 2017.

Mass-transport management software provider WhereIsMyTransport received $7.5m in a series A round in March 2020 featuring Toyota Tsusho Corporation, the trading arm of carmaker Toyota, as well as fellow corporate investors Google, Nedbank and Liil Ventures. The round was co-led by Global Innovation Fund and Goodwell Investments, WhereIsMyTransport having already raised a total of $5m from aerospace manufacturer Bombardier, Liil Ventures, Goodwell, Global Innovation Fund, Omidyar Network and Horizon Ventures as of January 2019.

Social game publisher Carry1st raised $6m in May 2021 in a round that included video game developer Riot Games and mobile game publisher Akatsuki’s AET Fund. Konvoy Ventures led the round, which also featured Raine Ventures and TTV Capital. It followed an undisclosed amount of seed capital from Musha Ventures in 2020 and $2.5m in seed funding from smartphone maker Transsion’s Future Hub, CRE Venture Capital, Perivoli Innovations, Chandaria Capital, Lateral Capital and Kam Kronenberg III in May the same year to take its overall funding to $4m.

Coding school WeThinkCode received R60m ($4.6m) in 2017 from BCX, a digital technology subsidiary of telecommunications company Telkom. The capital was provided as part of a partnership that involved Telkom companies hosting 40 WeThinkCode interns a year for three years, expanding the startup’s Johannesburg office and launching a new campus in Cape Town.

Deal volume involving local corporates topped at 22 transactions in 2018 with a combined $3.8bn in funding, while this year it has so far logged about $2bn across 14 deals. CVCs have focused on services and financial technology startups, followed by the consumer sector. 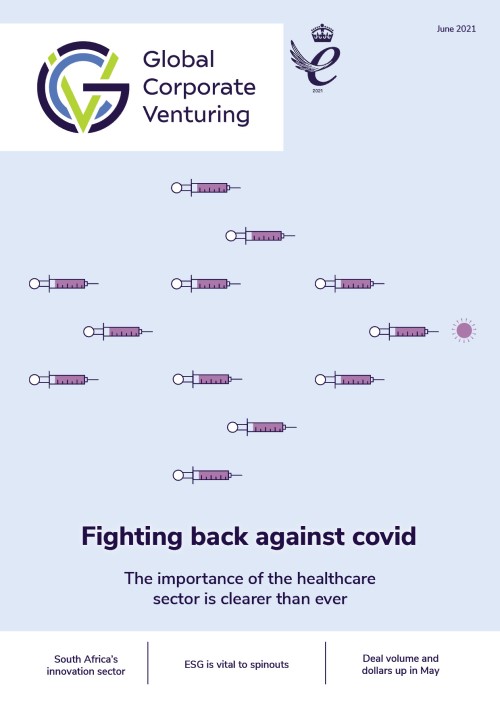 Learn from the best

Notes from the Bund