Texas, which has a population of roughly 29 million, is the second-most-populous US state after California.

“There is a plethora of new startup businesses incubated by industry and academic consortia with active engagement by both corporate and government stakeholders which have positively impacted the energy transition investment approach.”

Fort Worth, on the other hand, hosts aerospace and defence companies Bell Textron and Lockheed Martin’s aeronautics branch.

The CVC investment activity in Texas has grown steadily in deal value in recent years, rising from $600m in 2017 to $1.4bn in November 2020. However, PitchBook logged 69 deals so far this year compared with 96 last year and 78 the year before, which is likely to be due to the covid-19 pandemic.

BP Ventures’ Bown confirmed that the interaction of co-investors and startups has been challenged in the virtual environment, though dealflow in the region remains robust and constant.

Regarding synergistic opportunities in the region, BP works collaboratively across Texas academia with a close working relationship with Texas A&M, UT Austin and Rice, according to Bown, who noted BP Ventures is actively coordinating dealflow and opportunities with global energy CVCs.

“We also provide leadership to a multitude of incubators and accelerators including The Cannon, Houston Exponential, Greentown Labs, Rice New Energy and Plug & Play,” Bown said.

“Energy and life sciences companies receive a greater portion of Houston venture capital investment than in competing metros like Austin and Dallas, where the focus is more on consumer products, mobile apps
and software-as-a-service (SaaS),” Pherigo said.

Certain niche markets have also found a strong footing in Houston, where a large presence of Fortune 500 companies has created an opportunity for B2B software companies, added Pherigo.

“The region has been good for B2B payment companies, such as HighRadius, Houston’s only unicorn company; BMC Software and PROS, the two largest Houston-based tech firms; and promising startups, like the blockchain platform Data Gumbo. Aerospace companies also enjoy an advantage in Houston, which is home to NASA’s manned space programme and has a large presence of leading aviation companies such as Lockheed Martin
and Boeing.”

Lalany said: “We had a small handful of organisations working with startups in Houston 10 years ago. Today, we have over 35 Startup Development Organisations, or SDOs, that support startups in a multitude of ways including office space, mentoring, funding assistance and more.

“In addition, many more large corporations are looking to independent Houston innovators for new services or products. For example, most of the biggest names in O&G, healthcare and aerospace have developed innovation and venture arms to seek out and support innovative new ideas that could add value to their business or prove to be a good investment.

“Outside of the major industries, we have also seen a large increase in the number of general VC groups taking an interest or direct investment in Houston startups.”

Texas traces its digital innovation roots back to 1958 when an electrical engineer named Jack Kilby invented the integrated circuit while working at Texas Instruments in Dallas, explained GHP’s Pherigo: “The groundbreaking invention ushered in the digital age and laid the groundwork for Texas to become a hub for personal computing during the 80s with the rise of Dell in Austin, and Compaq Computers in Houston.

“Compaq, which was founded by engineers from Texas Instruments, is one of the most notable VC success stories in US history, raising $25m in 1982 and reaching $100m in sales the following year – the fastest startup to ever achieve that feat. Compaq was acquired by Hewlett Packard for $25bn in 2001, one of the largest tech mergers in history. Today, HP Inc and HP Enterprise have a combined 7,000 employees in the Houston region.”

Oil field services firms have also been active investors and buyers of energy tech startups, as they continue to digitise the oil patch, Pherigo commented, and added US-based energy services company Halliburton was an early adopter of the CVC model, acquiring the Houston digital tech firm Landmark Graphics for $557m in 1996, one of the largest energy technology deals in the US.

Pherigo continued: “National Oilwell Varco has been a prolific buyer of tech companies, completing more than 60 acquisitions within the last two decades to aid its effort in developing fully automated drilling rigs. Baker Hughes, one of Houston’s most historic and innovative companies, has undergone a transformation in the last four years to emerge as a more tech-focused energy firm. The company that invented the tri-cone drill bit, revolutionising oil drilling in the 20th century, was itself acquired by GE in 2015 and re-emerged last year as an independent ‘energy technology company’ as focused on data bits as drill bits.”

Furthermore, Pherigo pointed out that Houston leads the state in life sciences startups and biotechnology companies. “Healthcare is the fastest-growing sector of Houston’s innovation ecosystem, drawing $1bn in VC investment since 2015. Corporate investment has aided startup activity, which is clustered around the Texas Medical Centre’s Innovation Institute,” he said.

“Several corporations have funded research centres and incubators in the institute. Johnson and Johnson’s JLabs at TMC has become a hotbed of medical device innovation. AT&T’s Foundry offers incubation for promising digital health startups and the medical tech company ABB launched a medical Robotics Research lab at TMC in 2019.”

Harvin Moore, president and chief executive of HX, agreed and added: “While every other vertical saw a drop in investment count in 2020, the healthcare startup sector saw an increase – the total amount invested in healthcare startups doubled from $114m in 2019 to $233m so far.

“While the number of investments in the IT vertical dropped by 50% the total amount invested remained nearly the same. This means we saw a shift towards larger investments in a smaller number of IT startups.”

Elsewhere in Texas, Austin remains the most lucrative VC funding hub, generating more deals than Dallas and Houston combined. Pherigo said: “Most of these deals flow into mobile technology and SaaS. Austin’s tech scene has been boosted in the last decade by a surge of tech companies opening large offices in the region.

“Altogether, Apple, Facebook and Google employ about 9,000 workers in the Austin region. Dallas and Houston have both competed for tech company expansions in recent years. Uber announced a major expansion into Dallas in 2019, while the fintech firm Bill.com opened a Houston office in 2019 – its first outside of San Francisco. Microsoft, Google and Amazon have also opened Houston offices in the last three years.”

“Advanced manufacturing and fintech firms are also finding strong investment,” he added. “Cleantech deals have been on the rise in the last three years. An expansion of the Boston-based ClimaTech incubator Greentown Labs into Houston next year should further bolster startup activity in the clean energy space.” 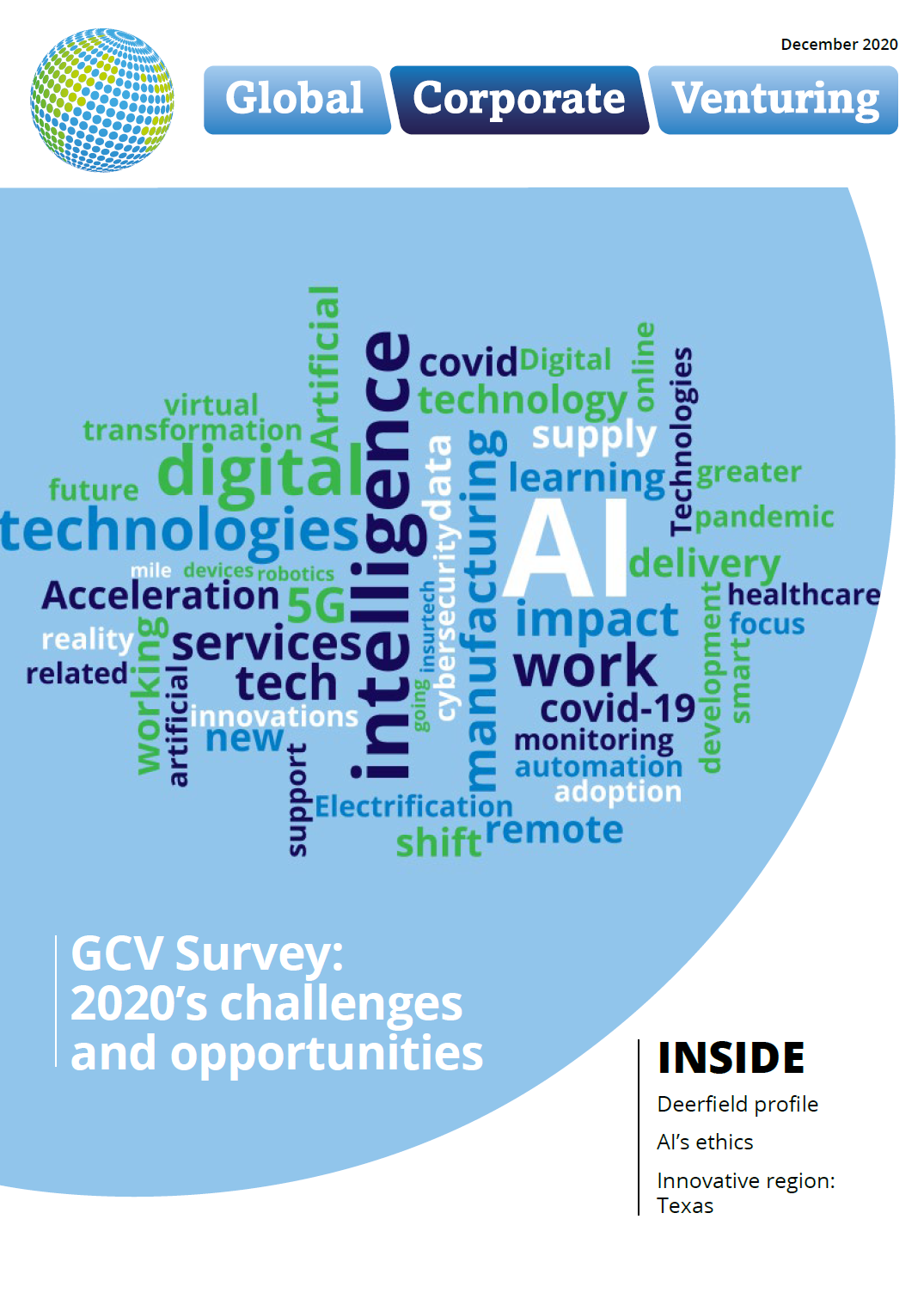 2020: the year of innovation capital

AI and ethics: the challenge of lining up stakeholders

Does Deerfield have The Cure?

Building blocks for a sustainable future

The big trends of 2020 in corporate venturing

Why blockchain startups are the perfect strategic investment for energy corporates

Turn on, tune into spatial transcriptomics

Mobilising all forms of capital for sustainable development

Navigating uncertainty and investing for the future

Agriculture blossoms into a tech age

Why startups should be seen but not heard